Below Slideshow is year wise history written by Ramsay. Use arrows to move forward or backward. Give us your feedback

1936
Brahma baba (Dada Lekhraj) received three powerful visions one by one: One of paradise (new world), one of destruction and one of Vishnu (deity). When Dada chants “Om” during times of contemplation, people attending the satsangs, frequently goes into trance and have visions of God as a light, of Shri Krishna, of Satyug (heaven), of Dada with an angelic body, as well as seeing other divine beings. At this early stage, Dada Lekraj is referred to as Baba, Om Baba or Dada, as the father of Om Mandli. Upon direction of God almighty during early mornings (Amritvela time), Dada lekhraj surrendered all his wealth to a group of 5 women appointed as the founders of Yagya. Cases ran in court of Sindh Hyderabad against Om mandli and Dada Lekhraj as children, women who went to Om Mandli either surrendered, or they urge to remain Pure for the life (upon God’s direction). 5 vices are to be conquered and thus, people (men) of Sindh protested against them. Many women were locked inside their home or beaten by their husband. Seeing this, Om Mandli managed to relocate to Karachi, Pakistan.

October 1937
Picketing and protesting from close family members begins, in defiance of the perceived anti-Hindu approach of women being empowered and leading celibate lives.
Early knowledge is limited to the Cycle and the Soul. There is a clear perception that destruction is imminent – there will not be another Diwali.
During Golden Age and Silver Age the consciousness will be I am Creator of Creation (unity). During Copper Age and Iron Age the consciousness will be I am God but the Creation mere illusion (duality). There is great intoxication with the knowledge of the Drama and it is referred to in beautiful ways including the Eternal Creative Play and the World Bioscope. Early yagya members understand that there is a confluence of the old and new time periods but the Confluence Age per se, is not yet understood.
The understanding of the soul is distinctly different to what we know today. In the 1930s and 1940s the soul is understood as ‘Aham Brahm Asmi’ or ‘I am God,’ although it can be translated in a number of ways. The understanding of the soul as a jyoti bindu (or a sentient living point) takes nearly 20 years to become clear. In the Gita, Brahma is both manifest and unmanifest, the ocean and a thumb. At that time there is no clear distinction between God and the self or between the self and the realm of light known as ‘Brahm’.
Despite their lack of intellectual understanding, members have great spiritual confidence that they are the same souls of the previous kalpa, that they are the chosen ones, and they are the key to the world’s liberation from sorrow. They experiment with practicing different states of mind. The great love, awareness, belonging and purity sustain them through many years of scant knowledge.

August 1938
Due to violence and protesting, the community moves to Karachi and changes their name to Rajsuva Asvamedh Avinashi Gyan Yagya (the indestructible sacred fire of knowledge in which the horse is sacrificed). Nevertheless, the protesting follows them. As do a series of court cases brought by members’ families to try to – unsuccessfully – disband Om Mandli.

1939 – 1942
Experiences of bodiless samadhi increase amongst everyone. They experience merging with the Brahm element. Many report experiencing ‘light upon light’. Early pictures (drawn in the early to mid 1940s) show ‘Infinite Divine Light’ written around the Cycle and the Tree, as this is what they frequently experience in their meditation.
Dada writes notes in the morning and Mama reads them to the class. Trance messengers share their experiences daily so that others may learn from them. The community has stopped reading the Gita and notes down what is being spoken through Brahma, recognizing it as distinctive.

1943
The role of Brahma is clarified for the first time. A young Sister, Pushpa, goes into trance, and then a whispering voice (that we now understand to be the influence of Shiv Baba) speaks through her. Dada refers to this ‘personality’ as Piyu, meaning the Beloved. No-one had heard this voice before, so it generates some interest, particularly in Dada, as it confirms his intuition that there is another power, another personality, responsible for the experiences he and others are having. They begin to call the written notes that Dada writes ‘Piyu Vanis (versions of the beloved)’.
Piyu gives Dada the name ‘Brahma’ and clarifies the role of Brahma as creator. With this revelation, members start referring to him as Prajapati (Lord of the World) God Brahma. This confirms their bhakti understanding of Dada as a form or incarnation of God Vishnu. Brahma Baba though, believes in the distinct personality of Piyu. However, that does little to convince others. Nevertheless, one can presume that, at some point during the early years, Brahma Baba feels he is indeed God Brahma, due to the strength of the experiences that others are having through him and the power of his own insights and experiences.

1944-45
During this period Brahma Baba relies heavily on a series of trance messengers to facilitate his own understanding and churning. Knowledge is still clearly Manmanabhav (let your mind be with God) Madhiajibhaw, ie Aham Brahma Asmi or Aham Chaturbhuj (I am the creator of creation/ Vishnu/ God).
In 1943 Gulzar Dadi has the first experience of Avyakt Brahma in the Subtle Regions, introducing the knowledge of the Subtle Regions for the first time, and the understanding of three distinct realms or ‘worlds’. The tendency is to compare the knowledge gained through insight, trance, and visions, with the stories of the Gita, which is still the frame of reference for their experiences.
From the 1940s until the early 1950s Avyakt Brahma is a source of understanding, knowledge and support. Avyakt Brahma is understood to be the complete form of Brahma, but the importance of that role is not fully clear until 1969 when Sakar Baba becomes Avyakt and the combined form of Bap and Dada emerges.
Pictures from the 1940s created through trance show ‘Infinite Divine Light’ (the omnipresent essence of God), written clearly around the Cycle and Tree. These pictures also identify Divine Father Gyan Surya (Brahma Baba) and Divine Mother Gyan Chandrama (Mama). The second picture of the tree has arrows indicating how Brahma becomes Vishnu, so Krishna, so Narayan, which is absent in the first picture. The difference in the pictures indicates the gradual development of knowledge.
During these years, while WWII is going on, they reason that this is the very same Mahabharat war spoken of in the scriptures, and the old world will be destroyed in 1950. This also fits with the famous story of the 13 years of exile the Pandava’s experienced. They felt there would be 13 years between the official beginning of the yagya, and the total demise of the old world.

Aug 1947
Partition of India. The Om Mandli community maintains silence, to develop their yoga practice and also for their own protection. The high wall that Baba had built to protect them from the violence through the protests, continues to serve them during the social and political violence of Partition.

1948
Shiv Baba speaks through Brahma Baba directly (not through Pushpa) saying “Shivohum” in the same whispering voice that had been associated with Piyu five to six years earlier. Dada Anand Kishore understands there is indeed the personality of God present, but this clarity and perception is not common. To some it becomes clear that Brahma is not God, that in fact no human being can be God. Some start becoming aware of a different personality.
During this second coming of Piyu, some report that – from time to time – there is a more intense light on Brahma’s face and forehead. Others say Brahma’s face was always shining, and others that there was no remarkable difference.

1949
Posters from 1949 still identify Brahma as Prajapati God Brahma. Around 1950 is when the understanding of the personality of Shiv Baba as a distinct incorporeal God emerges clearly. Murlis begin to be spoken by Brahma Baba with Shiv Baba also speaking.

May 1950
Baba directs all records from Pakistan to be destroyed or buried, to prevent the dissemination of misunderstanding. Many are reluctant to leave their precious diaries, so Baba tells them to bury their books and that these would then be discovered on the path of bhakti and form the basis of the scriptures in the next kalpa.
Om Mandli moves to Mount Abu and leases Brij Koti. Shortly afterwards they move to Pokhran House (Pandav Bhawan). They call the ashram Madhuban, named after the garden where Krishna played in the scriptures. Then in the early 1950s the Beggary Period begins, continuing for around 10 years.
Between 1952 and 1958, Shiv Baba is still thought of as thumb shaped. By end of the 1950s, the apprehension of Shiv Baba as a point of light becomes clear. Therefore, the knowledge of the soul as a point of light is also clear. In posters drawn after the 1950s a distinct difference is that Infinite Divine light is replaced by the presence of Incorporeal God Shiva. 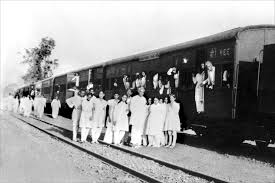 Group of about 180 arrived at Mount Abu in this train with their Aloukik Father and Mother.

1952
A lot is clarified. The differences between Brahma, Vishnu, Shiva, Shankar, Krishna all become clear. Understanding is still developing through trance and experiences in meditation. By now it is clearly understood that Shiv Baba and Brahma Baba are two distinct entities. Reportedly though, many still aren’t that concerned about it. Baba is Baba, whether there are two or one.
Service begin in centres outside of Madhuban and Brahma Baba came to be known as Prajapita (Father of the People), in contrast to Prajapati (Lord of the World).

1956-57
Clarification of Mind, Intellect and Sanskaras.

1957-60
Clear distinction of and relationship between Shiv Baba and Brahma Baba: ‘Bap’ and ‘Dada’. They understand that Shiv Baba, God, speaks through Brahma Baba, the first prince of Golden Age and the father of the people, and that God is not omnipresent. Confluence Age is understood.

1965
The name ‘BapDada’ starts being used, clearly indicating collective acceptance of two entities at work, with Shiv Baba as Supreme.
Again, the feeling of world change being imminent remained with them, as it does with us today. Now the knowledge is clear, Baba directs all records of previous knowledge to be destroyed for the second time, so that there is no trace of wrong understanding that remains within the Brahman family.

24 June 1965
Beloved mother of Yagya, Mamma (Jagadamba Saraswati) becomes Avyakt (angel), leaves the body. Mamma was an embodiment of all virtues and powers.

1966
The picture of The Ladder (taken from another religious institution) is used as a way to describe the downfall of humanity. This ladder references destruction in 1976, as original members continue to sense imminent world change couple of spiritual urgency to become completely pure. This timeline may draw on the story of the Pandava’s in the Mahabharat War where 39 years passes between the Pandava’s renunciation of sovereignty and their ascent to the top of the mountain, mirroring the establishment of the yagya and the destruction of the old world.

Since 1969, services around the whole world has increased. Services started outside of India.

BaapDada: Writting Letters from Madhuban to children at centres across India